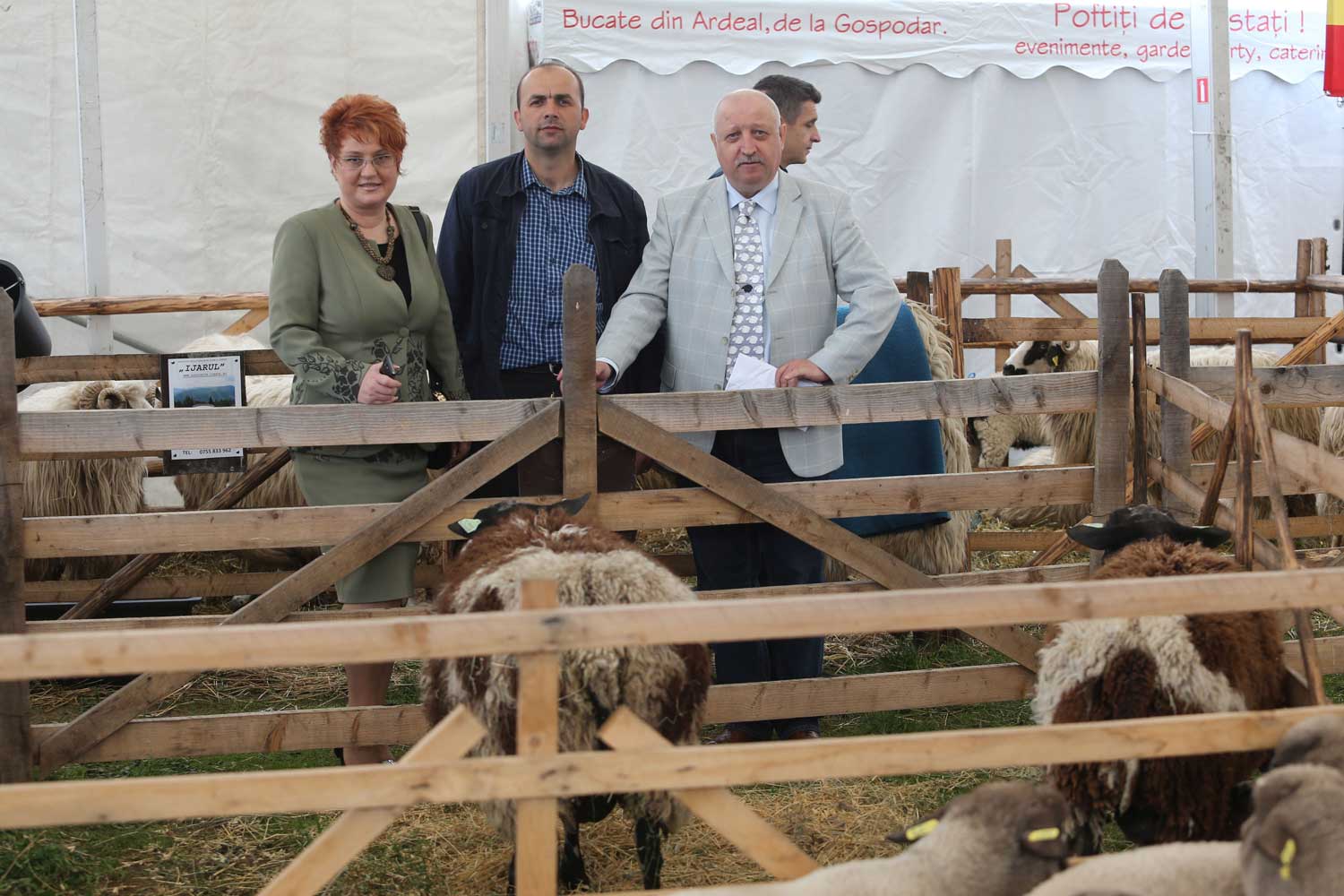 AgroTransilvania Cluster: How did a renowned plastic surgeon get to raise sheep?

Toma Mugea: “When I first started raising sheep I was out of work, so I cannot claim that I was a surgeon. I was at a cabin in the mountains and close by there were a lot of flocks of sheep. I became friends with one of the shepherds, they used to come visit us at the cabin because I like to cook. Used to cook three to four different dishes in 2-3 hours and they had a great time. We sat by the candlelight, because the cabin did not have electricity at that time, and talk. I used to visit their sheepfold every once in a while, where they used to treat me with some cheese, eggs and what else they had. I asked them what can I do to take part in the milking process? The rule in Mărișel is that, if you have at least four sheep, once in every summer season, you will have to go at least once and take part in the milking process. So, we bought four sheep. I never wanted to build a farm, nor to live off of the four sheep or to breed them. When it was our family’s turn to participate in the process, it was a show. The sheepfold had about 500 sheep, it was a significant milk quantity. From our four sheep’s milk we made different types of cheese. Afterwards, I started to visit the sheep market from Gilău, which is held in the first Friday of every month, and we bought every animal that looked better. That is how we got to have about 25-30 handpicked sheep in our flock, which I left in the care of a friend from Mărișel. Through natural growth and buying a few more, we reached about 50 sheep. Sadly, my sheepherder had to move to the city for work and could not take care of my sheep any longer. At that time, I had 50 sheep and nothing to do with them, I felt compelled to tell him <<take them and do what you want with them>>, which I did not want to do, on top of that I do not like to feel compelled to do anything, so in the end I decided to keep them.”

I hired a shepherd whom did not want to come and work without his son. As such, I hired them both under a working contract, in order to avoid what happened before when shepherds leave and I have no legal document to make them respect the deal we have made prior. Well, to have two shepherds under a working contract for 50 sheep is foolish. So, I bought 200 more sheep. This is how this whole adventure started. I bought a tractor and a trailer and all winter long I went up there to get everything set up. It was May when all the births ended, the milking process had to begin alongside with the grazing on the meadow. The two shepherds, father and son, told me: doctor, we will not be coming from tomorrow onwards, we are going to the forest for work. I told them we signed a contract which they had to comply to. The answer was: you do what you want to. I left Mărișel with a friend and went to Sălaj, where we came across some gypsies who were living under some conditions that you probably only see in India, in the dead-end of a village, in a swamp, in a straw hut with mud walls, but with a satellite dish on every window. Stelică, who was a shepherd, came up to me and said that he worked with people from the County of Sibiu, and to work with such people holds weight. He only wanted to come with his wife and their 6-months old daughter. After a two-hour negotiation, me and my friend took them, put them in the care and brought them to Mărișel, in a cabin on the pasture. This cabin was only planks through which wind could pass easily, and the small fireplace let half of the smoke on the inside of the cabin. With a heavy heart I left them there. Afterwards I decided to build a civilized home there. As the construction began, we started looking for water but did not find any. Someone pointed me towards Căpuș and told me there was a meadow for rent there. The place was astonishing. A contract between me and the town hall was made, and we decided to move the sheepfold there. We built a fold for the sheep, a home for the shepherd and a sanitary group with everything that was needed. This is how the story began, with no plan whatsoever. Everyone pushed me to move forward with it. Every year I did something. It is like a car, not only you need a steering wheel and wheels, you will want to have doors too. Now we are trying to get everything up to the European norms that are in place. We said that if we were going to do it, we are going to do it by the book, and not change everything in two years’ time. At the same time, we worked on the livestock breed as well. If in the beginning we had all kinds of breeds in our flock, slowly but surely, we got a point where we only have Romanian țurcane. We also bought rams. Now I can safely say that I am content with our livestock. We will enroll in the Control Registry in order to be recognized as owners of animals that come from a controlled origin. Under these conditions, the subsidy can be better, also a subsidy is granted for the quality of the care that the animals receive. We have been doing this for about seven to eight years now, before the European regulations came into place. Often, the farmers say that the doctor knows, he has knowledge, but I did all of this based purely on instinct. Now we have set up a processing line for the milk, a processing path if you will, it is not a processing plant. It is just a fenced off terrace. You go into the enclosure, which has walls that can be easily disinfected, there is a locker room, a sanitary group, then you go through a small office where the milk can be examined, then you get into the processing zone. Then there is where the cheese is made and the cold storage room. Therefore, it is a chain of rooms where it all takes places. Nothing, except the pipe that the milk flows through, is made out of stainless steel. The milk spills into a funnel which has filters. We only use traditional methods in the process. The presses that we use are operated by marble slabs that act as counterweight, which can be supplemented in order to reach the wanted drainage for the cheese. We are not using a snail system that applies unequal pressure. The boxes that the cheese is drained in are made out of maple wood. We received the recognition for a traditional product, we registered the “Ijarul” mark as a whey-made cheese, we have a lot of product names registered at the Romanian State Office for Patents and Marks, because we want to diversify our product catalogue. We have a cheese made with cold-pressed oil with various aromas, we also make cheddar. Sure, the quantity of the milk has been low in recent years, which were hard due to the draught, we kept the lambs with the sheep, which in turn, lowered our quantity of milk we could process. Therefore, we have a limit on the quantity of the cheese we can produce, and we do not buy milk from anyone else. All that is produced at the farm is biologically certified. We even got to be recommended to receive the distinction of Supplier for the Romanian Royal House.

Where are you selling your products?

We market our products very little; we mostly just display them. We sell under the “Ijarul” brand in AgroTransilvania Cluster’s shops located in Iullius Mall in the front of Auchan supermarket and at the cluster stand located in Carrefour Vivo Cluj-Napoca. However, because we do not have a person appointed to handle this side of the business, things have been going slow. Moreover, we haven’t really been trying hard on this side because there were a lot of other priorities. Now, we’ve focused our attention towards obtaining the Transylvanian Lamb certification from the State Office for Patents and Marks (OSIM), for which we did. We are aiming to create this brand of Transylvanian Lamb Meat in order to make it clear that our lamb comes from a specific place to all our European buyers. Transylvania is known through its history, the visits from the Royal House of Great Britain, so we banked on this opening. What does the Transylvanian Lamb meat mean? It is a mix between a specific breed of sheep (țurcan) and meat rams which can be German Black, Hampshire, Ile de France or other. The advantage here is the conformation of the father, but the taste qualities of the products will be indigenous, due to how we treat the sheep. They will not be fed granules or kibbles, nor would they be kept in closed shearing shed where no light can come through, instead they will peacefully roam and graze on our meadows.

What are your plans for the future?

We want to lend a hand in the development of the 500 members of the Ijarul Association, sheep and goat breeders, to provide information which can be used in reaching their goals. At the moment, we are dealing with getting better prices for selling lamb. It is something else when you have to negotiate with 500 people. It depends a lot on their reliability that the terms of the contracts are fulfilled in order for them to have credibility in the years to come. We are thinking about getting involved with AgroTransilvania Cluster to develop a system to sell our products in the cluster’s shops. The association wishes to have its own shop where it can sell its own dairy products or lamb meat that comes from the slaughterhouses.

Can someone make a living from such a farm, from raising sheep?

It is really hard, but it can be done. Working closely with the family is very important. The four people who are working at the farm at this moment are a family: three brothers, one of which has a wife. After four tries we got to these experienced people, with love for animals, I trust them fully, they gave me enough time for me to finish other projects. In the future the association hopes to obtain preferential contracts with other countries like the ones from the close Orient, where we could deliver chilled, not frozen, meat, meaning we do the whole slaughtering process locally and send them the carcasses